If Men Were Angels: Reason and Passion in the Enlightenment

The research team of the project “Between Secularization and Reform. Religious Rationalism in the Late 17th Century and in the Enlightenment” organises the ninth seminar in the “Enlightenment and Religion” series. The seminar, to be held on 11 March 2021 at 18:00 to 20:00 CET (6 p.m. to 8 p.m.) on Microsoft Teams, will host Dr. Dominic Erdozain (Emory University, USA) who will deliver a lecture titled If Men Were Angels: Reason and Passion in the Enlightenment. All willing to join the meeting are kindly requested to sign up via the website of the project (https://www.religiousrationalism.com/event-info/lecture-by-dr-dominic-erdozain-emory-university) or by sending an expression of interest to the following address: religious.rationalism@iphils.uj.edu.pl. More information about the project and the seminar is available on the website: https://www.religiousrationalism.com/events. The event is open to everyone interested in the topic.

Two errors dominate scholarly perceptions of the Enlightenment: the idea that it is over and the idea that it was secular – committed to the destruction of religion and largely successful in the endeavor. Together, these fallacies serve to distort the reality of a movement that remains the intellectual foundation of modern democracy and liberal discourse. The post-modern critique, which defines the Enlightenment as a presumptuous “project,” has been too quick to dismiss its achievements, while the secularization narrative – sometimes allied with the postmodern critique – has confused anticlericalism and pluralism with unbelief. This has nurtured a divisive and aggressive secularism, on one side, and a defensive dismissal of “the Enlightenment project” among political and religious conservatives. A more accurate and nuanced understanding of the Enlightenment as a period of religious reform rather than outright critique serves, above all, to tell the truth about historical thinkers too often reduced to caricature. It may also assist mediation between contemporary polarities for whom the Enlightenment is either an icon to be embraced or a demon to be rejected. In particular, it may help to develop a more complex understanding of the Enlightenment’s ideas of human nature as they informed the growth of democratic thought.

In the twentieth century, a staple of conservative polemic against liberalism was that liberal democracy was “utopian” and failed to address the evils said to inhere in human nature. The Enlightenment was said to have “got human nature wrong,” the arch-offender being Jean-Jacques Rousseau, with his cheerful perception of a species born free and only ruined by society. This sinless anthropology, it was said, severed conscience and morality from revelation or theology, paving a road to the moral anarchy and sweeping utopianisms of the twentieth century.

The problem with this theory is that it effectively blames the Enlightenment for the sub-rational and emotivist political cultures of the nineteenth century – including nationalism – which were largely forged in reaction to the ideals of the eighteenth century. My aim in this essay is not to defend the Enlightenment position on human nature as correct or inherently plausible. It is to demonstrate that the period’s confidence in reason was consciously balanced with a critique of the passions and a strong sense of the limitations of conscience. It was, in other words, an age of reason that recognized the shortcomings of its central idea – seeking assistance or sustenance in the spheres of politics, the law and what it regarded as the right kind of religion.

Rousseau provides an interesting case study. Long regarded as a symbol of the free and selfish conscience, Rousseau developed a political philosophy that probed insistently at the perils of autonomy and the importance of absorbing individual desire into a “general will.” Rousseau rejects original sin but redefines this Christian concept as a phenomenon woven between the appraisive society and the assertive ego. His political remedy would strike many now as authoritarian and perhaps sinister in its construction of loyalty around a civil religion, but the larger point is that his vision of a social contract did not presume any kind of infallibility in the natural person.

A second example, even more important for the American context in which I write, is John Locke, whose liberal formula is one of the foundations of Anglo-American democracy. My claim is that Locke’s philosophy has been misrepresented as giving birth to any form of individualism. Rather, it develops a concept of a social contract based on the historical realization that people are “partial to themselves.” They are, as Locke asserted with many early Enlightenment philosophers, endowed with reason yet inclined to ignore it. Reason, of which conscience was the moral or ethical expression, had failed in its “task” of morality, Locke argued, which meant that religion and politics remained urgent necessities. Yet this was not a competitive relationship, in which faith trounces conscience or civil duty crushes individual autonomy. It is the exhortation that conscience must be respected and protected, but it cannot be relied upon to build a just and stable society.

The final part of my paper shows how these ideas were absorbed into an American Constitution that proclaimed equality and frailty with equal sensitivity. As James Madison argued in the 51st Federalist Paper, “If men were angels, no government would be necessary.” Contrary to an influential body of historiography, which has regarded the American polity as a “republic of virtue,” the writings of Madison, Alexander Hamilton and even the more optimistic Thomas Jefferson, are suffused with an almost mournful realism as to the human propensity for virtue. A political system, they argued, must be designed for men as they are, not as they would be. And this realism, it turns out, was rooted in a combination of historical analysis and a Christian concept of sin. Drawing on Locke, French philosophers such as Rousseau, Voltaire and Montesquieu, and on a host of lesser known English radicals, these architects of the American Constitution were sophisticated students of theology, and their “secularism” – the desire to ensure religious freedom and a separation of church and state – was anchored to this skepticism of human virtue. The claim that religion, as surely as politics or commerce, may function as a sphere of egoism or “self-love” inspired them to set limits around the political scope of religious institutions. This secularism was theologically informed and supported by marginalized religious groups. So faith played a central role in the formation of the liberal and secular state. These were not accidental, ironic or “eclectic” contributions. They reflected a sophisticated understanding of human nature as good yet prone to corruption by the passions and therefore in need of regulation by a rule of law.

Dr Dominic Erdozain – historian of philosophy and Christianity, studies the phenomenon of secularisation and evangelism in the English-speaking world. He was lecturer in the history of Christianity at King’s College London (UK), and currently works at Emory University (USA). Dr Erdozain has authored the following books: The Problem of Pleasure: Sport, Recreation and the Crisis of Victorian Religion (2010) oraz The Soul of Doubt: The Religous Roots of Unbelief from Luther to Marx (2015). 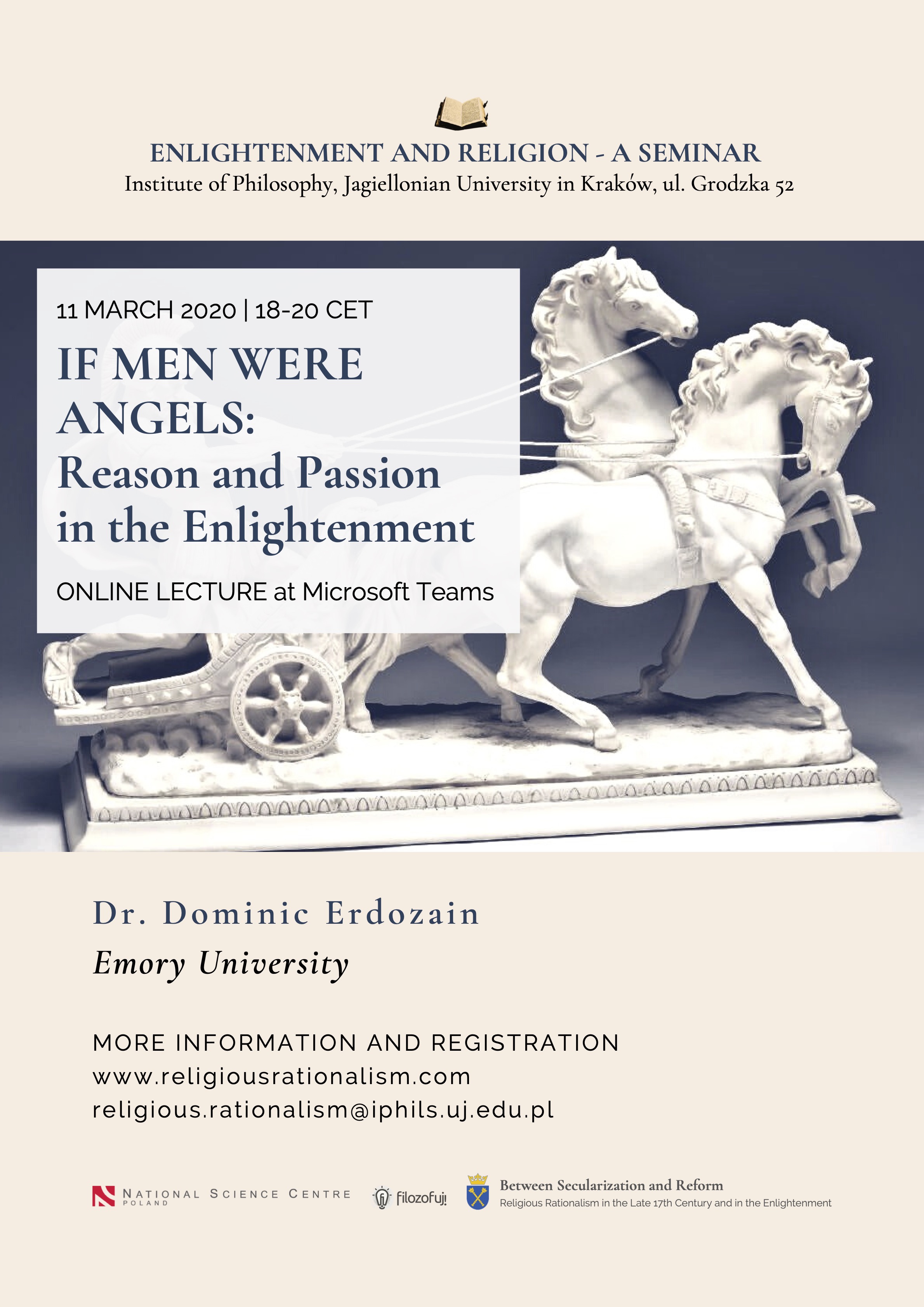