Johann Joachim Spalding and the Bestimmung des Menschen: Philosophy (and Religion) as a Way of Life in the German Enlightenment

The research team of the project “Between Secularization and Reform. Religious Rationalism in the Late 17th Century and in the Enlightenment” organises the tenth meeting in the “Enlightenment and Religion” seminar series. The meeting, to be held on 26 March 2021 at 16:00 to 18:00 CET (4 p.m. to 6 p.m.) on Microsoft Teams, will host Prof. Laura Anna Macor (University of Verona, Italy) who will deliver a lecture titled Johann Joachim Spalding and the Bestimmung des Menschen: Philosophy (and Religion) as a Way of Life in the German Enlightenment. All willing to join the meeting are kindly requested to sign up via the website of the project (https://www.religiousrationalism.com/event-info/lecture-by-prof-laura-anna-macor-univ-of-verona) or by sending an expression of interest to the following address: religious.rationalism@iphils.uj.edu.pl. More information about the project and the seminar is available on the website: https://www.religiousrationalism.com/events. The event is open to everyone interested in the topic.

Abstract: In 1748 the still unknown would-be pastor Johann Joachim Spalding (1714–1804) published a small work entitled Betrachtung über die Bestimmung des Menschen, wherein a fictional I embarks on a monologue with a view to discovering the aim of human existence and the behavior required in order to fulfil this aim. Spalding adopted a quite peculiar perspective for a future exponent of the Lutheran clergy – omitting any reference to the Bible, yet including explicit quotations from the Classics. In so doing, he opened the path for what turned out to be a new way of looking at religion, philosophy and their mutual relationship, and this is to be seen as the main reason for the immense success of the text across ten further enlarged and updated editions as well as a number of clandestine reprints and translations over the whole of the second half of the eighteenth century. Spalding’s little treatise crucially contributed to reshaping not only religion – well beyond the erudite and dogmatic controversies following the Reformation – but also philosophy – leading to the well-known popular trends of the late German Enlightenment, and finally to Kant’s primacy of practical reason.

It is the purpose of this paper to reconstruct the genesis and sources of this unconventional approach, as well as vindicate it as a hitherto unacknowledged contribution to the long-standing and well-established tradition of “philosophy as a way of life”.

Prof. Laura Anna Macor – lecturer in the history of philosophy at the University of Verona, specialised in the 18th-century German thought. She has been awarded the Alexander von Humboldt scholarship to fund her research stay at the Catholic University Eichstätt-Ingolstadt and Marie Curie Intra-European Fellowship at the University of Oxford. She has done research and lectured at the University of London and Martin-Luther-Universität Halle-Wittenberg. She has authored such books as Die Bestimmung des Menschen (1748-1800). Eine Begriffsgeschichte (2013), La fragilità della virtù. Dall'antropologia alla morale e ritorno nell'epoca di Kant (2011), Il giro fangoso dell'umana destinazione. Friedrich Schiller dall'illuminismo al criticismo (2008). She has edited and co-edited collected volumes: Schiller y la revolución (together with Valerio Rocco Lozano, 2017), The Italian Renaissance in German Thought (1742-1859) (2016) and Machiavelli and the Making of German Identity (2015). 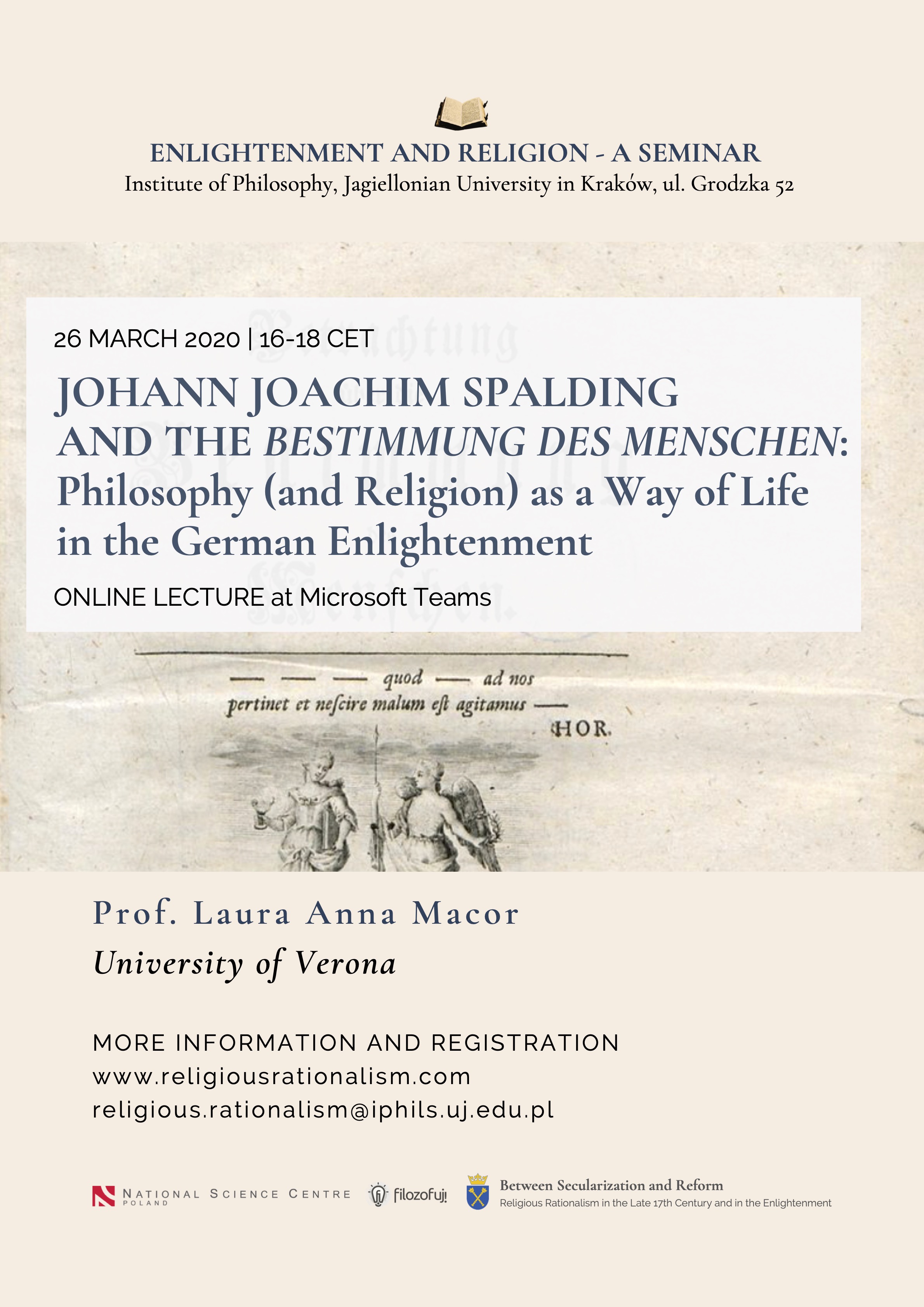