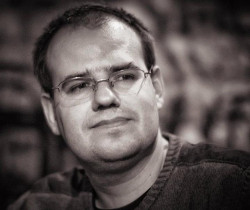 I defended my PhD thesis about rule-following and semantic non-factualism in 2010. I started working as a full-time assistant professor/lecturer at the Department of Philosophy of Jagiellonian Univeristy in 2013. My main research interests from that moment focused on foundational issues in philosophy of language and on metaphysics of mind (especially the status of propositional attitudes). Currently, I have also developed interest in social ontology. From 2018 I am a member of Jagiellonian Centre for Law, Language and Philosophy.

The main aim of the project was to provide an comprehensive overview of anti-realist views about folk psychology. My aim was to check whether it is possible to provide a negative answer to the question whether we actually have such mental states, as many has found such a negative answer to be not feasible, if not downright incoherent. I ventured into checking the plausibility and consistency of such views as eliminative materialism, expressivism about attitudes, interpretivism, mental fictionalism and some others. The results of my project has been published in “Eliminativism: the Problem of Representation and Carnapian Metametaphysics” and in “Irrealizm a nastawienia sądzieniowe” [in Polish], with some more papers hopefully forthcoming.