The research team of the project “Between Secularization and Reform. Religious Rationalism in the Late 17th Century and in the Enlightenment” organises the twelfth session of the seminar “Enlightenment and Religion”. The session, to be held on 29 April 2021 at 16:00 to 18:00 CET (4 p.m. to 6 p.m.) on Microsoft Teams, will host Prof. Stephen R. Palmquist (Hong Kong Baptist University) who will deliver a lecture titled Does Kant’s Enlightened Religion Have Quaker Roots? All willing to join the meeting are kindly requested to sign up via the website of the project (https://www.religiousrationalism.com/event-info/lecture-by-prof-stephen-palmquist-hong-kong-baptist-university) or by sending an expression of interest to the following address: religious.rationalism@iphils.uj.edu.pl. More information about the project and the seminar is available on the website: https://www.religiousrationalism.com/events. The event is open to everyone interested in the topic.

Abstract: If the Age of Enlightenment began with René Descartes’ Discourse on the Method of Rightly Conducting One's Reason and of Seeking Truth in the Sciences (1637), the work of George Fox (1624–1691) in founding The Religious Society of Friends (also known as “Quakerism”) fell within this period. The question therefore arises whether, or to what extent, the radical religious reformation effected by Fox and his Friends can be regarded as an “enlightened” approach to religious faith and practice. In other words, was early Quakerism (traditionally thought to have started in 1652, the year Fox had a vision of Christ while walking on Pendle Hill) an expression of the budding values of Enlightenment culture, or was this movement actively opposed to this forward-looking trend? This paper answers this question in two ways. First, an overview of the writings of Fox and other early Quakers suggests that they were no more enamored with the Enlightenment’s newfound faith in reason than they were with the established church’s perversion of what they saw as the true Christian gospel.
Having established that the early Quakers did not embrace many of the values of the early Enlightenment, I re-examine the status of this movement by viewing it through the lens of two works published by a philosopher who was born a century after Fox and whose work arguably put an end to the Enlightenment, Immanuel Kant (1724–1804). Kant’s 1784 essay, Answering the Question: What Is Enlightenment?, outlines the basic conditions for enlightenment and claims that genuine enlightenment had not yet occurred: if enlightenment is to be more than just a game played by intellectuals, religion must be radically reformed. Almost a decade later, in his 1793/1794 book, Religion within the Bounds of Bare Reason, Kant then set out the rational conditions for the possibility of such an enlightened religion, arguing that the Christian gospel contains within it all of the key elements of such enlightened religion, even though Christianity in most of its historical manifestations had distorted this ideal way of being religious almost beyond recognition. One could argue that Kant’s last published book, The Conflict of the Faculties (1798), ended the Enlightenment (as an intellectual movement) once and for all.
When viewed through the lens of Kantian Critique, the goals and values of enlightenment come out looking remarkably consistent with Quaker faith and practice. Like Kant’s vision of “rational religion”, the Religious Society of Friends opposes hierarchical structures, adopting a non-clerical approach to being religious. Both emphasize individual integrity and sincerity, encouraging believers to affirm only those doctrines and creeds that are theoretically and practically meaningful. Both see establishing world peace as one of religion’s main goals. Both recognize education as the proper focal point of church life, moral education being paramount. While Kant has traditionally been regarded as an enemy of mysticism, recent work on the quasi-mystical tendencies of Kantian Critique suggests that even Quakerism’s focus on silent worship may also be qualify as enlightened in Kant’s Critical sense. 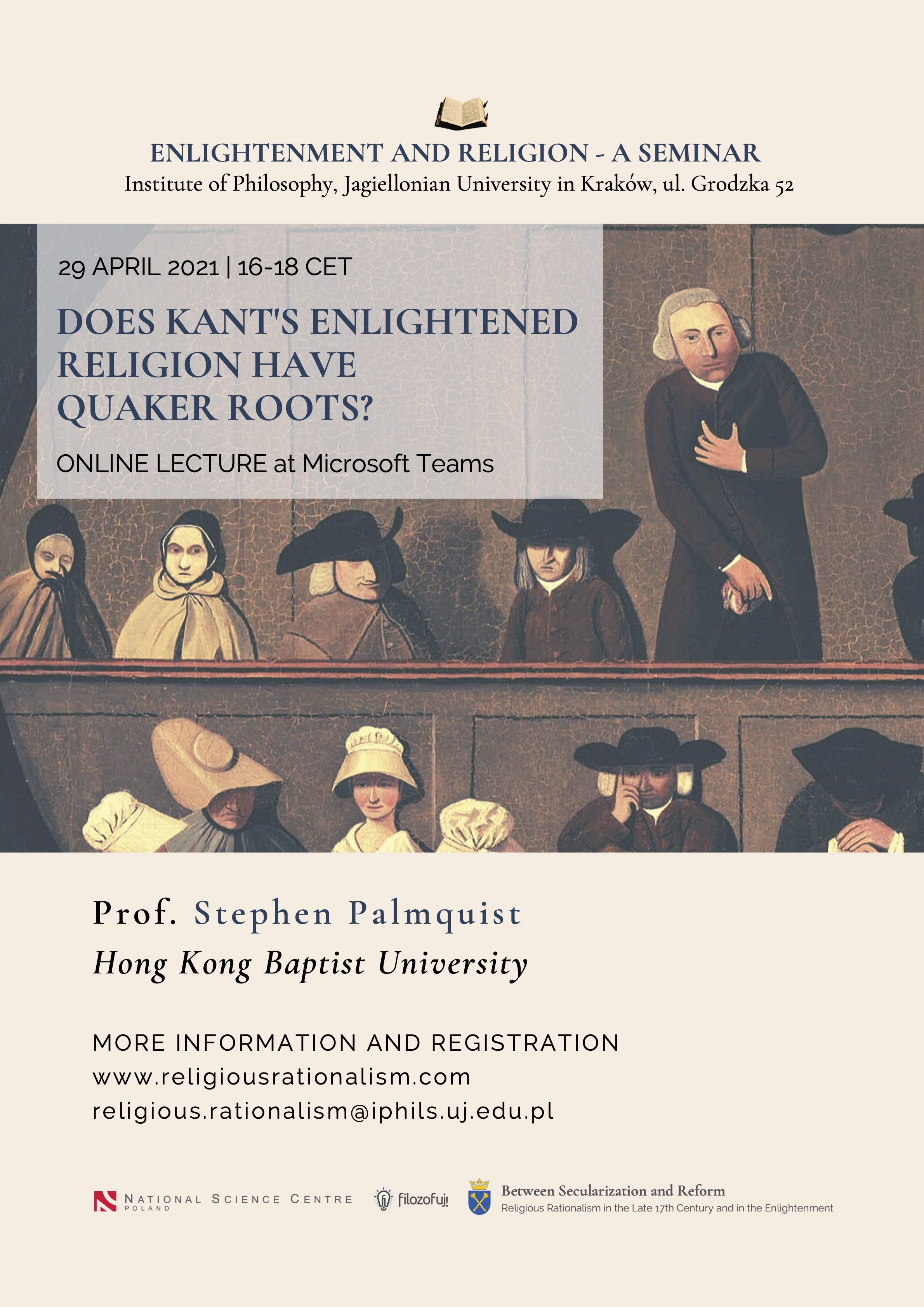